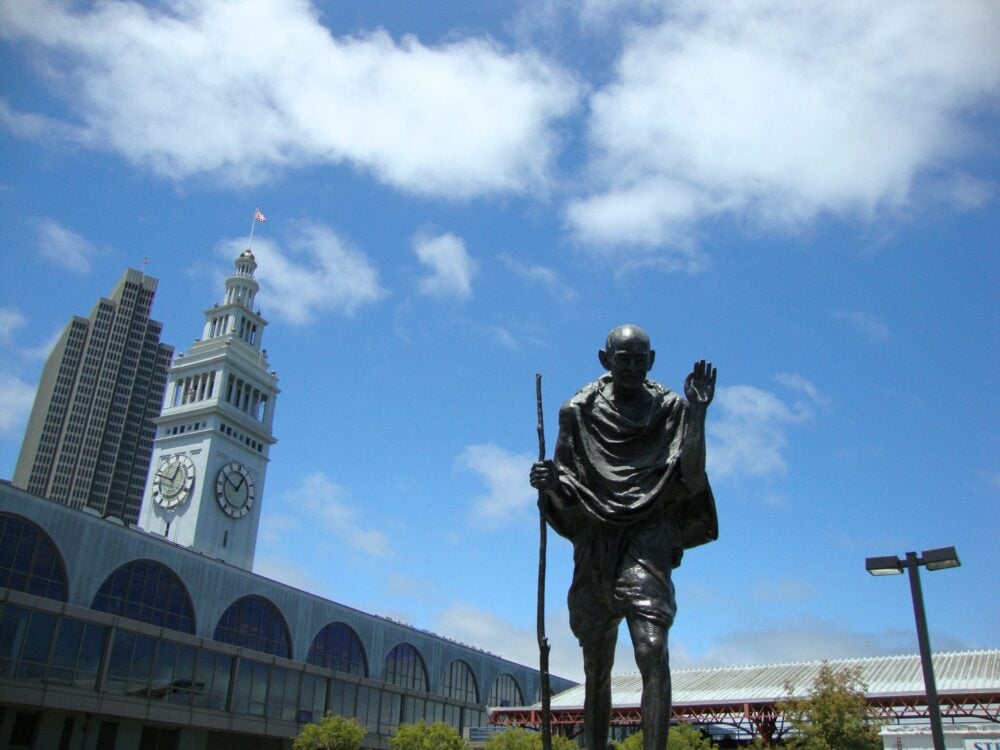 In most cities in America, you have to go into a museum or gallery to actually appreciate art. San Francisco is very different. The city is characterized by culturally rich streetscape and intriguing architecture. To complement the unique environments, public art can be seen on display all over; sometimes where you least expect it. Sure, this city has more than its fair share of art venues but do not forget to appreciate the beauty that might be staring you right in the face as you are waiting for a bus or sitting on a bench enjoying your coffee.

Right behind the San Francisco Ferry Building is a statue of Gandhi. He appears to be walking into the bay when viewed from the right angle. It was donated and installed in 1988. However, its location has sparked a lot of controversy, as many feel that a legendary speaker for world peace deserves a location better than a parking lot, but others feel the spot is perfect as he welcomes ferry travelers back. His round glasses have been stolen numerous times, and his staff has been vandalized, making him look as though he is holding a magic wand now. Perhaps he is going to cast a special spell over the already charming neighborhood of Embarcadero where he resides.

Coosie Van Bruggen and Claes Oldenburg crafted this 60-foot tall outdoor sculpture from stainless steel and fiberglass. It represents a bow and arrow, the traditional symbol of love. It is shooting directly into a newer 2-acre pedestrian park on the waterfront.

An Injury to One

In the Financial District, you find this vibrantly colored sculpture created by Keith Haring, an artist and social activist who died of AIDS at only 31 years old in 1990. This statue is loved not only because it was one of his most brilliant works, but for what it represents. An Injury to One was created in memory of Nick Bordoise and Howard Sperry, who were killed in 1934 on Bloody Thursday. A general union strike followed these dreadful union-related killings.

South of Market at Mission and Spear you find this unique mural. It is a painting of men with rifles proudly hanging the original bear flag. When you see it today there is a white cloth lying on the ground that looks as though it was a cover used to unveil the flag. In all actuality, that white cloth was once the Mexican flag, but it was eventually covered because some felt it was simply disrespectful.

Some call this the “Anti-gravity Sculpture,” but it was designed to represent the four intersecting cones of Tau, which describes a solar year form. It was created in 1984 and placed outside the office building at 160 Spear St. where it has remained. It has a 96-inch diameter, and it is most impressive to see in the winter when the sun hits the front midday.

This bronze statue is a popular favorite with tourists who love to take pictures with it. Right in the heart of the city in the courtyard at 201 Spear St. is this life-size statue of a man. He is dressed in a business suit and holding a camera to his eye. He was created by J. Seward Johnson Jr. in 1986.

Since 1993, this bronze statue has greeted visitors to the Yerba Buena Center. It was created by Terry Allen, and although it is not said to be of Ronald Reagan, there certainly is a resemblance. The statue is of a man in a suit holding a briefcase. He has multiple hands and feet which make him look as though he is shaking or vibrating.

This South of Market statue at 560 Mission St. was made by George Rickey, who used the fundamental elements of physics and nature to build his career. As the name implies, this public work represents a solar eclipse.

Leave it to San Francisco to have interactive art on display. Urge is installed in front of Zeum at Yerba Buena Gardens. This bronze and stainless sculpture of a skeleton stands on top of a globe. When someone at least 100 pounds sits on the bench that faces the glove, the skeleton gracefully moves to a seated position. It is by far one of the most brilliant pieces in this city.

This welded bronze sculpture that depicts a slumbering human lies over the entrance of the W San Francisco Hotel. It was created by Michael Stutz, and one more fabulous piece in Yerba Buena Gardens.

Liked our article about San Francisco? You’re welcome to several more to help you in your moving plan:

The Best School Districts in the San Francisco Metro Area

How to Meet New People in San Francisco Before You Move

8 Things You Need to Know before Moving to San Francisco

How to Find Sublets in San Francisco

A Tour of Public Art in San Francisco

Moving to San Francisco On the Cheap

The First Things to See in San Francisco