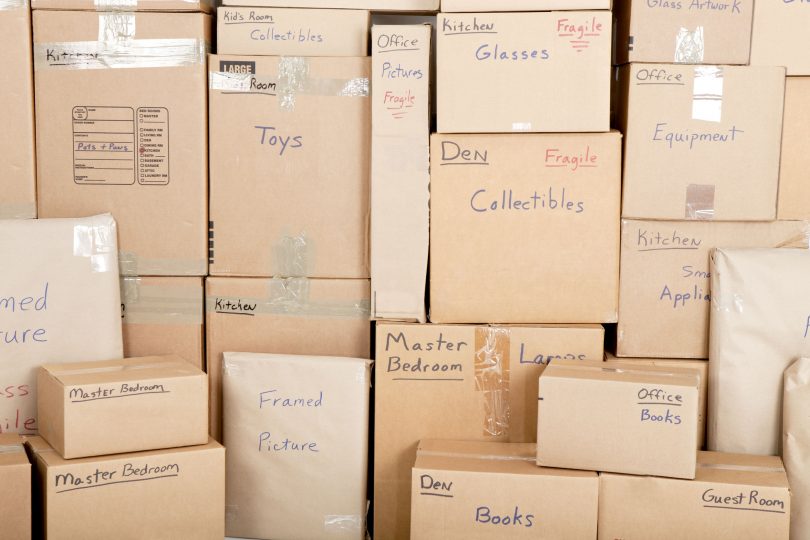 One of the most harrowing — yet important — parts of moving is packing up your household items. It can be stressful, overwhelming, and generally mind-boggling — but it doesn’t have to be. If you approach packing with a mindset of preparedness and come armed with the knowledge to make it go smoothly, you’ll end up packing efficiently with ease.

So if you’re stressing about packing for a move, check out the 7 biggest packing mistakes to avoid — and plan accordingly!

Don’t stuff your boxes with too many things! Over-packing a box can lead to it ripping, which can, in turn, lead to losing valued items along the way. So while it may be tempting to fit all your kitchen gear into one single box, if it’s too much, bite the bullet and use two boxes, or as many as it takes. As long as the boxes are labeled, you’ll be better off.

If you’re packing liquids (which in many cases, you shouldn’t), make sure that the containers are sealed tight, and instead of placing them directly in the box, put them first in a Ziplock bag, just in case they spill. Always place the liquids upright in the box, and label it loud and clear so movers know not to turn it sideways.

To avoid forgetting things and then having to take them by car or stuff them in a big Miscellaneous box, make a Packing Supplies Checklist. This can help you keep track of all the items in every room of your house, and you can check off each item as you pack it. Your checklist might also include a section of things you need before you start packing, such as boxes, tape, string, bubble wrap, and more.

While it’s important not to over-pack, it’s also important to maximize the space you have, because otherwise, you’ll end up with a hundred boxes. To maximize space, place large items into the boxes first, followed by smaller items. If you do it the other way around, you won’t have room for the large items and you’ll end up leaving them unboxed, or again, using more boxes than you need.

If you stuff all your shoes into a box or bag, they’ll end up getting crushed. Instead, stuff shoes with packing paper (not newspapers, which can bleed) so that they don’t lose their shape. Wrap one shoe with packing paper completely, then add the other shoe and continue to wrap with the same piece of paper. Alternatively, if you have the original shoe boxes, you can just place the shoes inside. Heavier shoes go on the bottom of the box, lighter shoes on top.

6. Waiting until the last minute to pack

Don’t! Make a schedule for yourself of when to pack each room and approximately how long it will take. Give yourself a few extra hours for each room, because packing usually tends to take longer than you think it will. And if you wait till last minute, you can end up getting overwhelmed and stressed, not packing properly, and forgetting things.

People tend to underestimate how many boxes they’ll need to pack their stuff. In some cases, they even buy less than half of the boxes they’ll actually need. To avoid this, either consult with a professional moving company or err on the side of caution and buy more boxes than you think you’ll need.

When you approach moving with a clear plan of how to proceed and what to avoid, you’ll minimize stress and feel less overwhelmed by the task at hand. And once you’ve aced the packing, you’ll find that the unpacking in your new home is that much easier, and dare we say it, enjoyable!