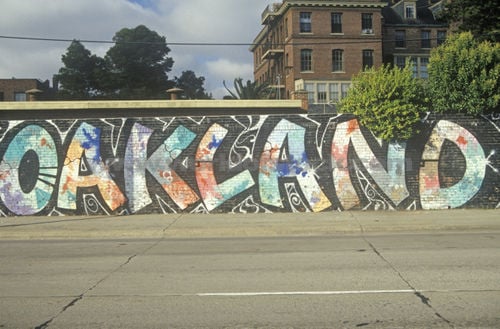 Living in the Bay Area has been a longtime dream for generations. California’s incredible coastline, mild weather, and liberal mindset have drawn many for years, and its bubbling tech and art scenes have only added to the appeal in recent times. San Francisco is naturally the first major city that comes to mind at the mention of the Bay, but its neighbor Oakland is starting to give it a real run for its money with many creatives, artists and young professionals calling it home. Here are all the reasons everyone is moving to Oakland:

Situated just across the bay and a short BART ride away, Oakland enjoys easier access to downtown San Francisco than some neighborhoods of SF itself. This is thanks to the highly efficient public transportation connecting the two cities, which is faster and easier to access than the metropolis’s own network of buses and trains. And you can also leave your car in parking heaven (aka Oakland, or simply home) and go about your city business before hopping a train back at the end of the day. It is also worth mentioning that Oakland is just as near to Berkeley, another hot town which offers tons of culture and entertainment to creative millennials.

If you’re living in San Francisco you already know- rents are insanely high and decent housing is hard to come by, even at over-the-roof prices. Oakland offers much more options for fit-for-humans homes and apartments, at much more reasonable prices. For example, the median rent in Oakland was at $1,812 in 2013, while in the Bay it was a staggering $3,396. That’s a massive price difference for just a little jaunt across the bridge. A quick look at Craigslist will illustrate clearly the greater availability of decent apartments, too. Moving to Oakland means you no longer need to settle for a shoebox, or share your flat with a dozen roommates or so- better than San Francisco or what?

Yes, Oakland is heavily saturated with young talent, but that doesn’t mean it’s tough to find a job. With huge companies like Pixar and Pandora, along with many independent publishing houses and an exploding startup scene, Oakland has been experiencing a massive growth in jobs, especially in tech and media. What’s more, seven companies within Oakland made Forbes magazine’s list of the country’s top 100 fastest growing companies — including 3D printing specialist Fathom, which made #2 in the nation.

4. The weather really is better here

As weird as it sounds, Oakland does indeed have much better, warmer and sunnier weather than San Francisco and the West Bay. Temperatures hover around the 60’s and 70’s all year round, and on average there are 261 sunny days per year in Oakland- out of 365, mind you. Moreover, the weather is more predictable, so locals don’t have to carry hoodies around in anticipation of a 10-degree drop when the fog sneaks up on the city.

5. Small businesses get a leg up

The Oakland community puts a big emphasis on shopping local and keeping revenue in the East Bay — and with so many small businesses to choose from, you can keep it local and take care of all your shopping needs. The local nonprofit Oakland Grown gives small businesses a wide range of support under the umbrella of the Sustainable Business Alliance, so if you’re relocating to Oakland with a big idea brewing, this might just be a great place to plant seeds and grow your new project.

6. The landscape is simply gorgeous

When it comes to the great outdoors, Oakland offers a bit of everything: fresh salty sea air, rambling trails up to sunset views like the Claremont Canyon Fire Trail, urban parks with an assortment of amenities, and of course, Lake Merritt, the 155-acre lagoon in the middle of the city. Oakland’s residents are pretty proud of their landmark tidal lagoon, which is surrounded by parks and 3.4 miles of shoreline.

7. Oakland loves to be green

Oakland and the West Bay are serious about making the world a better place, and being part of the green revolution. It is truly inspiring to see Oakland’s empty lots transformed into urban vegetable patches, and buying locally grown food is such a simple and satisfying triumph- no wonder Oakland folks are hella proud. By restructuring agriculture laws the city has become the epicenter of urban farming, and organizations like City Slicker Farms are making growing food in the city accessible for everyone with education programs as well as assistance in creating your own backyard mini-farm. Sustainable Oakland represents the city’s efforts at sustainability, from water protection and conservation to financing tools for clean energy projects.

From fine art galleries to hippy-esque art collectives, avant-garde performance venues to experimental music ensembles, DIY everything to graffiti galore, Oakland is all about creativity. Local creatives say they find inspiration simply drifting on the wind here, emanating from the brilliant minds of their neighbors and colleagues. This is a huge reason to move here if you’re an art lover or an artist yourself. Word also has it there is a burgeoning gnome population spreading in the city, so keep your eyes open as you wander.

9. Parking and driving are blessedly easy

In many modern cities driving and parking a car are closer to a biblical punishment than an everyday banality. If you’ve ever tried to find parking in San Fran, or you’re relocating from New York, Oakland’s driving and parking situation will make you rub your eyes in disbelief. No more circling the one-way blocks for half an hour to find a place to park for the day. No more insane parking fees. It’s true: in a magical place called Oakland, you can have the city vibe without the city parking headaches.

Oakland is one of the most diverse cities in the country and its population is a wild mix of races and ethnicities, which is exactly what a cosmopolitan city should be all about. The huge diversity also makes for a colorful blend of cultures and ideas, fueling the city’s creative spirit and fascinating community life.

Oakland’s food scene is definitely on the rise. Some may even go as far as to prefer it to San Francisco’s, which is saying something. But actually, it’s quite understandable- with the costs of opening and running a restaurant in SF skyrocketing, young and creative chefs are looking for more affordable yet equally cool locations- in short, they, too, are moving to Oakland. Just pay a visit to Calavera and Ramen Shop and see what these formerly SF based chefs are bringing to the Oakland plate. If you’re as passionate about your conscience as you are about your palette, don’t worry- spots like Rudy’s Can’t Fail Cafe and Doc’s Classic make conscious and tasty bites that are reasonably priced, so you can stick to your budget and your culinary ethics. And how about some affordable eats in the Bay? You can find a few great ones in this blog post.

Moving to Oakland and want a little help? Check out our list of recommended movers in Oakland.