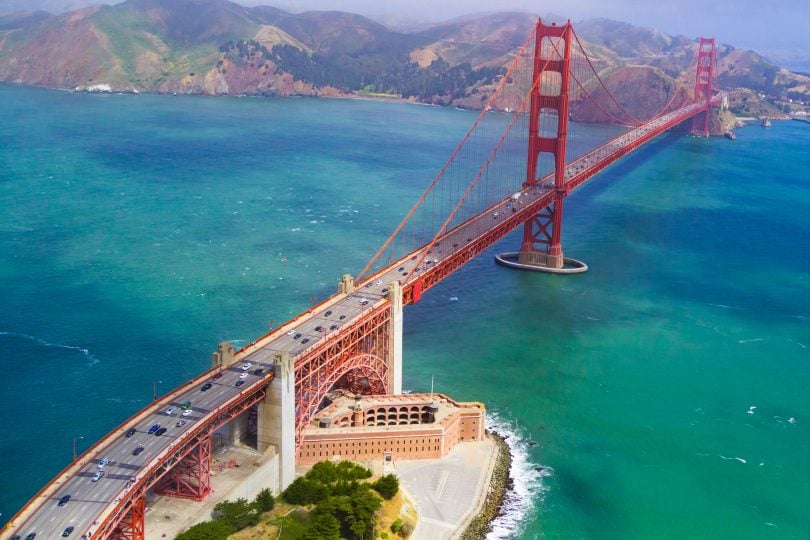 Whether you’re a recent transplant into the city or a proud native, there are likely a lot of things you don’t know about San Francisco (or as you may call it, simply The City). Read on for some fun facts about this beautiful, diverse city of many reputations, and impress visitors when they come to town!

The Golden Gate Bridge could have looked much different…

…if the Navy had their way. The original color choice for the bridge was black and yellow striped, to make it more visible in the fog (there are about 100 foggy days a year), especially if it was under attack. The iconic color the bridge is adorned with today is called International Orange. In fact, this wasn’t even a paint option – the bridge had been primed in the orange color to protect the pieces in transit, and the architect liked it better than any of his other options.

Another little fact worth mentioning: the Golden Gate and Oakland Bay bridges were constructed during the Great Depression. Business was so good (so good, not a single bank in the city failed) during the Depression that these huge landmarks were put in place.

The Cable Car has a special recognition

San Francisco is famous for its cable cars. Whether you’re traveling across the city for practical purposes, or just to spend some time on the trolley taking in the city sights, if you’ve spent any time in SF you’ve likely hopped on one of these at some point – the cable car transports 9.7 million people a year, after all. But did you know that the Cable Cars are considered a National Historic Landmark? Not only that, they’re the only one – out of more than 2,500 in the US – that can move.

And while we’re on the subject, the cable car was built in 1873 and runs at a constant speed of 9.5MPH, in case you were wondering.

The California Gold Rush began in 1848, and the news of gold found in the area brought some 300,000 people to California from both the US and abroad, hoping to strike it rich. The Bay was full of ships, many of which were docked in San Francisco’s port and eventually abandoned. Due to the ongoing demand to build up the city, it was decided that the ships would be dismantled and used as materials for businesses, banks, and homes. Whether you’re moving to the city or dipping your toe in the water in a nice sublet, perhaps the landlord knows some of the colorful history of your building – there may be a chance you’re in an old ship!

And in another area of Gold Rush practicality: Levi Strauss invented denim jeans in San Francisco when the miners needed comfortable but durable clothing.

What really took down the city?

San Francisco was hit by a now-infamous earthquake of 1906. It registered a magnitude 7.8, devastating the city. But the truth is that it was the resulting fires after the earthquake that did most of the damage, and it was a lot: three-quarters of the city was destroyed in four days. The cost of the damage in today’s value would be more than $8 billion.

The 1906 earthquake was also the first natural disaster to be comprehensively documented in photographs. Also, a few months after the quake, photographer Frederick Eugene Ives took the first color photographs of San Francisco.

City of the living

In 1902, the board of supervisors passed a vote to stop all burials in the city, citing space issues. It remains a law to this day, that no one may be buried within the San Francisco city limits. There are two remaining cemeteries in the city: one behind the Mission San Francisco de Asis, and the National Cemetery in the Presidio. All others were relocated to Colma between the 20s and 40s.

A notable Chinatown and a sweet treat

The first Chinese immigrants to the United States arrived in SF in 1848. Today, the Chinatown district in San Francisco is the second largest in the world outside of Asia, and one of the oldest in the country. The neighborhood spans 1 mile by 1.5 miles, and is home to more than 100,000 people, making it the most densely populated area of the city.

Many people don’t know that the modern fortune cookie was invented here. The Hagiwara family from Japan are actually the inventors, after first serving them at the Tea Garden in Golden Gate Park.

And no, we’re not talking about the many celebrities who call SF their birth city. In this case, we mean the bear who served as the “model” for the State Flag of California. His name was Monarch and he lived in Golden Gate Park. He weighed 1,100 pounds and one of the last remaining wild grizzlies in the state. He was captured, brought to a zoo within the park in 1889, and lived there in captivity for nearly 22 years. He was stuffed and put on display in 2012 at the California Academy of Sciences, an exhibit serving to explore the role humans played in the mass extinction of grizzly bears.