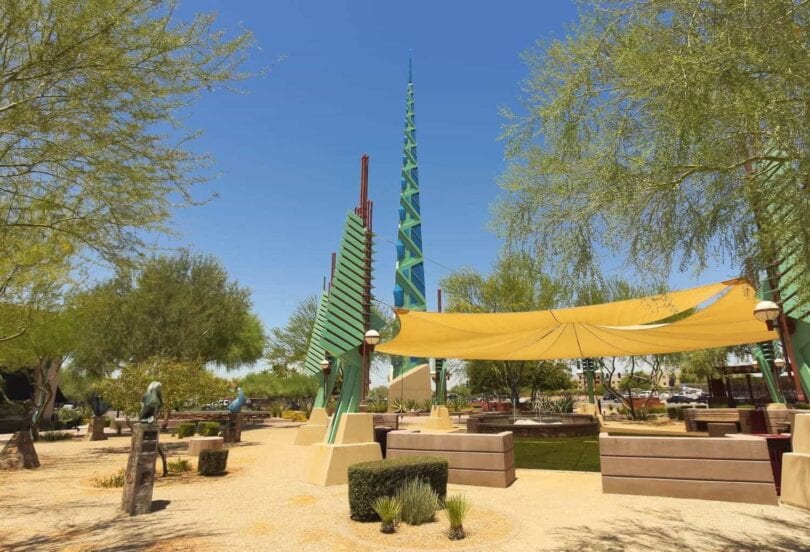 Scottsdale, AZ, has been increasingly on the radar as an up-and-coming city for more than just its snowbird population and resorts: the perfect weather and affordable housing is bringing people by the droves to this desert city. We have a feeling that influx might increase even more now that MyLife has awarded Scottsdale the title of the best city to raise a family in the country based on some solid research. So if you’re considering moving to Scottsdale, here are some excellent reasons why you’re making a good decision for your family.

This is a community where people feel safe to walk, bike, and be out and about at any time of day. With desert temperatures so high in the daytime and cool at night, you can bet that people are out in the evenings — so you and your family can feel confident that you’re in a supportive and watchful community. In fact, there is only about half as much crime in Scottsdale as the U.S. average, a significant difference and the reason why Scottsdale ranked among the top five safest cities in America according to Law Street Media. The Mayor of Scottsdale suggests that this is because the community is close-knit and dedicated to cultivating a strong and safe community, so if this is an environment that sounds enticing? It’s time to book those movers.

The schools are top-notch

School districts are generally rated by student test scores, and Scottsdale’s children have proven themselves to be pretty smart. That means teachers are devoted to student success and creating a learning environment that is supportive for all learners, whether public, private, or charter. The Scottsdale public school system offers after school programming at all of its elementary locations, and its high school students rank highest in the state for SAT and ACT scores. The area is also home to the nationally known Judson School and P.A.L.S. Play and Learn Schools. There is an overall emphasis on education in the community as well, with 95% of Scottsdale’s residents having graduated from high school or higher.

Your family can live in comfort in the desert. The median household yearly income in Scottsdale is about $20k higher than the rest of the state, in part due to the strong and growing economy in the city. Tourism is the city’s largest employment sector with aviation and the health sector coming in next. The city offers a range of incentive programs to make it easy for new businesses to move to the area, creating plenty of excellent job opportunities for those looking to relocate to Scottsdale with a family.

And the cost of living is manageable

You’ll likely pay a little more to live in Scottsdale than if you’d chosen a smaller Arizona city, especially if you want to live in the city center — but all in all the cost of living is manageable. Housing prices pushed the cost of living a bit higher after the city’s boom back in 2008, with home purchases somewhere up around $300,000 within the city. The average apartment rent is around $1,200 within the city, also a bit higher than the rest of Arizona, which perhaps is why many choose to live on the outskirts of the city in South Scottsdale. But with the thriving economy? These prices are within reach for a family seeking to live in Scottsdale.

If you look at Scottsdale on a state map, you’ll see a massive expanse of land right next door: Tonto National Forest is home to trails, peaks, and plenty of wide open space to roam. Southwest of the city is the Sonoran Desert National Monument, and closer to home you’ll have easy access to plenty of options. Scottsdale’s park system was rated the best in the state and the city’s Parks and Recreation department is truly top-notch managing sixteen community parks and even more local neighborhood spaces. Whether you want bike trails, equestrian trails, or a hike with a view, you’ll find something to keep your wandering feet (or wheels) happy. Parks and Rec also runs a whole host of after-school and summer programs for the kids

Still unsure about Scottsdale? Have a look at this blog post to see why you’ll love living in the town nicknamed “The Most Western Town in the West”, and then find your movers in Scottsdale.