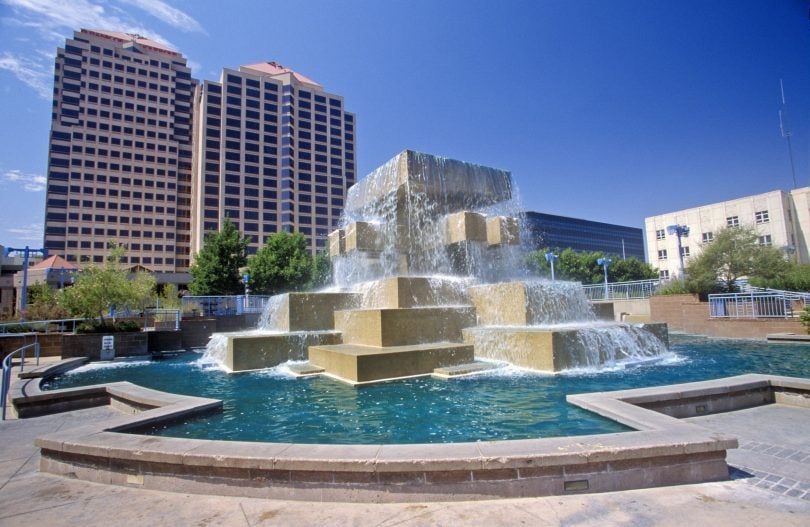 It might not be as glamorous as Los Angeles, as action-packed as New York or as high-tech as Seattle but living in Albuquerque can be fantastic. From its wonderful weather to its incredible landscape, the New Mexican gem has so much going for it. Beware: the following list will have you moving to Albuquerque sooner than you imagine.

Albuquerque is located at the foot of the Sandia Mountains, and their enchanting beauty is visible from everywhere in the city. Anyone city native will tell you these mountains are nothing short of magical. Their exuberant colors range from pink to purple and green to blue, and they seem to change with every minute, casting their spell on anyone lucky enough to be looking. And please- if you ever hear a cuter name for a mountain ridge- do let us know. It doesn’t get any cuter than the Watermelon Mountains (which is what Sandia means in Spanish).

There’s no arguing with cold hard numbers- Albuquerque gets 310 days of sunshine a year. The remaining 55 days are just a rare chance to experience what our fellow Americans on the east coast are complaining about all winter. The eternal sunshine makes for a simpler life- you can dress lightly, spend your afternoons outside and never bother with galoshes, but it’s ultimately much more than a mere convenience- it is the most powerful natural anti-depressant you can find.

Albuquerque offers all the amenities one usually expects from a big city in terms of services as well as nightlife, shopping and recreation options. Thankfully, it still maintains the small town vibe that makes it a sweet place to call home with no monster traffic jams, no noise pollution, and even cleaner air. Moving to a new city can be daunting, but Albuquerque is small and friendly enough to allow for a smooth transition, and its small-town antics make it easier to meet new friends. Be sure to check out our advice on how to prevent loneliness when moving to a new town too.

When you take a deep breath in Albuquerque you don’t need to worry about contaminated particles and air pollution, because the city has one of the lowest rates of air pollution in the country.

Albuquerque is known as one of the country’s fittest cities and ranked at no. 3 in 2012’s Men’s Fitness Magazine’s list of Top Fittest Cities. This shouldn’t come as a surprise though- Albuquerque has everything you need to get more active and stay in shape: over 22,000 acres of parks, miles (and miles) of trails leading up the mountains and great weather, which make it perfect for runners, cyclists, hikers and fitness enthusiasts of all ages.

While California has earthquakes, the Mid-West has tornadoes and the coastline cities have hurricanes and tsunami scares, Albuquerque is never in danger of a natural catastrophe messing up its laid-back normalcy. Isn’t life scary enough without Mother Earth’s little jabs at our illusory sense of security?

Easy on the Pocketbook

Everything is cheaper in Albuquerque. The reason for the low cost of living might be rooted in New Mexico’s poverty problem, but still- lower taxes and lower prices mean more money stays in your wallet. Filling up your tank, buying groceries and even getting a higher education are all considerably cheaper in Albuquerque than in most other cities nationwide.

Albuquerque is conveniently located at the intersection of two major highways- the I-25 and the I-40, making it easy to access major towns nearby. Denver and Phoenix are a few hours’ drive north or west accordingly while Mexico is only three hours south. Texas towns Dallas, Austin, and San Antonio are about a day’s drive east and if you drive west for 12 hours you’ll reach Los Angeles or San Diego.

While there are other sunny, clean, fit cities in the country there is one thing that makes Albuquerque entirely unique- its culture. Albuquerque’s melting pot combines Mexican, Hispanic and Native American cultures into a beautiful kaleidoscope of arts, crafts, music and of course, food. New Mexican cuisine is simply superb, and it doesn’t taste nearly as divine elsewhere in the country.

Breaking Bad… rings any bells? In recent years Hollywood has discovered what Albuquerque natives have known for years- it is insanely photogenic as well as hospitable and affordable, making it a dream location for many movies and TV shows. With more and more of these being filmed in the city, hot stars are being spotted more and more often around town. It may not be as glitzy as LA just yet, but it has definitely been getting its share of stardust.

What are you waiting for? Hire a moving company and get ready for some seriously affordable sun and fun! Here are some of the most recommended movers in Albuquerque.