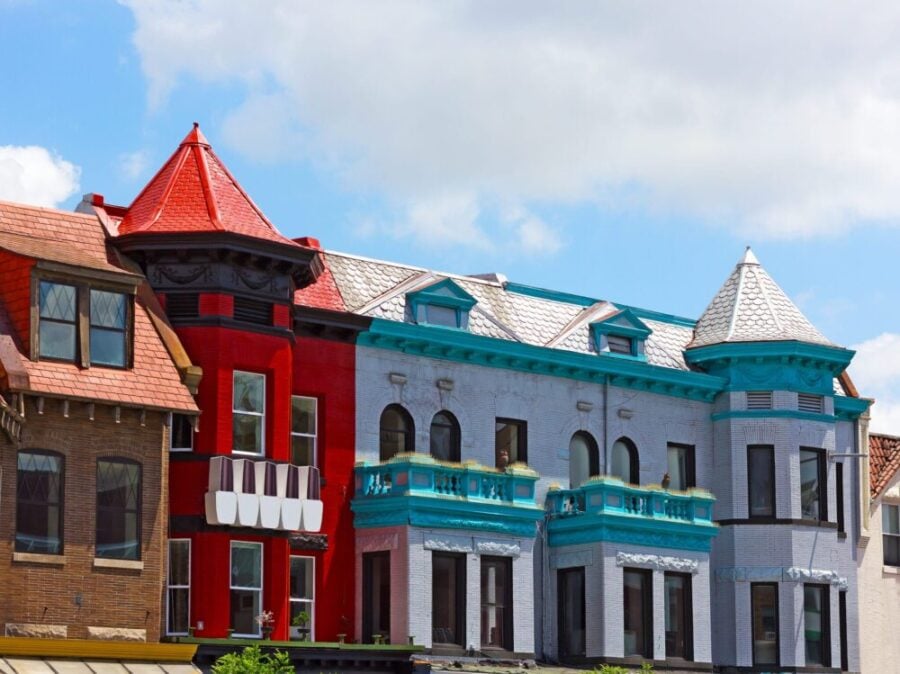 Moving to Washington, DC, can feel mighty intimidating: with over 100 distinctive neighborhoods, how can you choose which one is right for you? Whether you’re looking for an active nightlife, easy access to public transportation, or a more affordable option in the Capitol City, here’s a rundown on some excellent neighborhoods in Washington, DC for your relocation.

NoMa stands for North of Massachusetts Avenue and describes an area once known as Swampoodle- a neglected shanty town that has now become a hip destination for young professionals.  Just four blocks away from Capitol Hill, NoMa is central and easily accessible via public transit including two Metro stations, multiple bus stops, and the Capitol Hill bike share.  Home to H Street NE, which boasts a bevy of restaurants and shops that are the result of over $1 billion in private investments poured into the area between 2007-2008. Notable: The H Street Country Club will tequila you up so you can get your shuffleboard and mini-golf game on, or visit the Rock & Roll Hotel– a converted funeral parlor that is now a chic lounge with DJs, bands, and a rooftop bar.

Median rent in the H Street area is around $2,045, bringing it in at one of the more affordable of DC’s central neighborhoods for your cross-country move. Expect your neighbors to be young, hip professionals who enjoy their nightlife and the high walkability of this area.

Even the name of this neighborhood speaks to its culture and history: it was given in 1955 when all-white John Quincy Adams Elementary school and all-black Thomas P. Morgan Elementary school were integrated. The brightly colored building facades and high-energy 18th Street house a multicultural heartbeat that make this one of the more interesting neighborhoods in DC. The neighborhood regularly hosts weekend street fairs and the dining opportunities will whet your palate, though it will take you quite some time to try everything. From the down-home shack feel of Pop’s Sea Bar to the hip Korean comfort and street food at Bul, you can circle the world’s menus right in your own neighborhood.

Housing here is mostly row houses or apartments, though there are a few condos available for the persistent seeker with a median rent of $2100 — so for those seeking trendy and exciting life in the city, relocating to Adams Morgan might be your spot.

With a rapidly developing commercial center, Columbia Heights is a bustling destination if you’re relocating to Washington, DC. It is situated in the northwest quadrant of the city upon a hilltop, giving it a breathtaking view of the city center. Tucked between Piney Branch Park (a part of Rock Creek Park) and the Meridian Hill Park, bikers and pedestrians love to play in this friendly part of the city, and the more quaint restaurants and shops are still holding strong amidst newer retailers like Whole Foods and other chain stores.

Expect this area of the city to be home to more upper-middle-class families, though the median rent is still an affordable $2,200 considering the generally high cost of living in Washington, DC. The neighborhood has its own Metro station for the green and yellow lines as well as plenty of bus access. Don’t miss the cupcakes at Sticky Fingers Bakery, a casual vegan cafe serving “sweets and eats”, or get your dance on with DJs, craft beers and cocktails at Zeba.

Shaw has long been the hub of Washington’s music scene with the Lincoln Theatre, Howard Theater, and Bohemian Caverns, and Duke Ellington himself grew up in the neighborhood — so it’s no surprise that this neighborhood is one of the most diverse sections of the city.  Much of the area was built between 1862 and 1900 so the housing in Shaw is largely row houses, though a few luxury condo areas have been built. In recent years it has become a sought-after destination for new restaurants and small businesses like SUNdeVICH, a locally-focused sandwich shop, though the traffic to this gem hasn’t yet caught up — so now is the time for moving to one of Washington, DC’s best neighborhoods.

The median rent in the area is $2,374 and can secure you a home in one of the neighborhood’s historic Victorian buildings amidst the bustling music scene.  Shaw can be accessed by the yellow or green lines and is a highly walkable neighborhood.

Smack in between the K Street business district and U Street’s bars and restaurants Logan Circle is a perfect neighborhood for those looking to easily access both work and fun. With plenty of bustling restaurants, boutiques, and jazz joints, there’s always plenty to do in this neighborhood. The 14th Street corridor is a destination spot for visitors to the city, though there are also plenty of small jewels frequented by locals to keep the neighborhood feel alive.

Rent here is similar to Shaw at around $2,500 median, and since Logan Circle is said to be the only neighborhood that has maintained its Victorian-era skyline, you’re likely to find a beautiful new home for your long distance move that is historically elegant as well as within a half mile walking distance of every Metro line in the city.

Once you find a neighborhood to explore and call your new home, you can click here to find the best movers in Washington, DC to help you move!