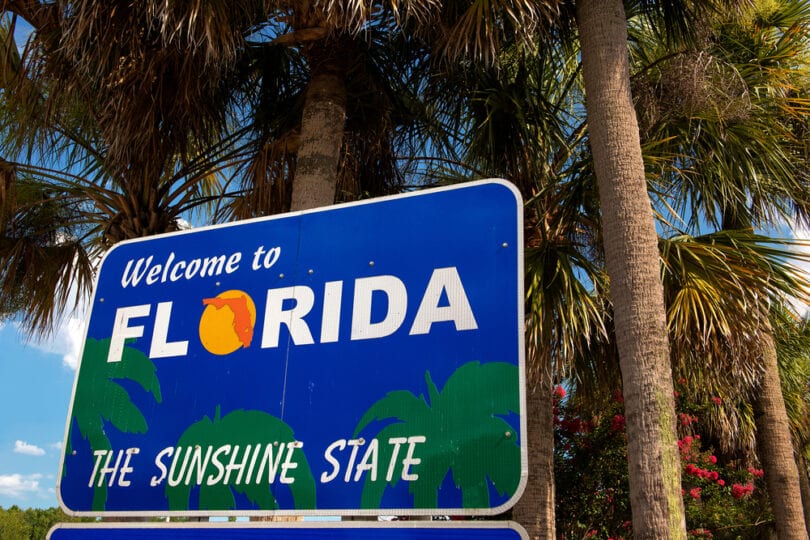 If you’re dreaming of moving far, far away from the icy grip of winter, Florida might be the first place you imagine. It’s famously popular with retirees, golfing celebrities, and Mickey Mouse aficionados, but many Millenials are also heading south to purchase their first home. Palm trees, Miami nightlife, and over 700 miles of beaches? Sounds pretty dreamy, especially if you’re currently bundled up. As with any big decision, there’s a lot to consider. So before you start shopping for sunglasses, here are the 9 things you should know before moving to Florida!

Florida is a big, diverse state.

The fourth most populated state in the country sometimes gets mislabeled. Though there are certainly a lot of snowbirds and tourists, there are also many, many other people: 21.48 million, in fact. The culture in Miami is vastly different from that in citrus growing country, which is different from the young, academic vibe in Gainesville. So when considering moving to Florida, expand your horizons. Is it the artsy beach town of St. Petersburg for you? Or does the history of St. Augustine, settled in 1565, spark joy? You don’t have to pigeonhole yourself as a golf cart-driving, beach umbrella-toting Floridian. There’s something for everyone in Florida.

It’s sunny, but not all the time.

Florida is a popular spring break destination for a reason: even in March, it’s warm and sunny on the beaches. But like anything, there are a few downsides to the climate in The Sunshine State. Situated on the Gulf Coast as well as the Atlantic, Florida gets its fair share of coastal storms during hurricane season. Thunder and lightning storms are a regular part of life, and in the summer the humidity is so high that air conditioning is just about mandatory. That is, unless you really, really love sweating.

Tourism is part of life

In the first half of 2018, 65.5 million people visited Florida. That’s a lot. In Florida’s major cities like Orlando, Miami, and Tampa, you very well may find more tourists than residents. But if you look for the less attraction-laden places, you can find some smaller, quieter beach towns that even still offer affordable real estate. But if you think that you can get away from tourists completely, you’re out of luck.

The Florida economy is strong

According to Investopedia, the largest industries in Florida are tourism, financial services, life sciences, Aerospace and aviation, international trade, and agriculture. That tourism tops the list might not be a surprise, since Disney World is one of the largest employers in the state; but financial services is a hot second. Startup tech companies are also on the rise, especially in culture-rich cities like Miami. As more young entrepreneurs move in, the pace of innovation will only gain speed. In 2019 Florida hit a record low unemployment rate of 3.1%, and the state reported continued gains in jobs. All of that bodes well for your bank account!

So low, in fact, that there is no income tax. This might explain why so many retirees flock to the Sunshine State, where they can more easily live on a fixed income. Compare that to the other sunshiney state of California, with a 13% state tax, and you’re practically making money for choosing Florida.

You will need a car to get around

Florida is an expansive state with a lot of rural land crisscrossed by highways. Within the larger cities, you’ll find some decent public transportation: Orlando and Miami currently rank best in the state, though you’ll still find some major traffic congestion. Other areas of Florida have sparse bus systems, but primarily rely on personal vehicles for transportation.

Cost of living in Florida is surprisingly affordable

You might think that Florida’s desirable beaches would drive up the cost of living, but that just isn’t so. Maybe it’s because so many of Florida’s visitors only stay for a short time? Home prices in popular coastal towns are, as you might expect, pretty high. However, you can still find very affordable homes in some of the smaller beach spots. Livability.com reported that the median home value in Florida is only slightly higher than national numbers at $233,200. Not bad!

Florida is a melting pot of people

Southern Florida tends to be a more culturally diverse part of the state, with a strong Latin and Carribean influence. Northern Florida is less so, and being home to the state capitol gives it a more buttoned up vibe than the nightlife of the southern beaches. Any way you slice it, Florida is home to an ever-changing population of people from all over. Some come to stay, some just stay for a while.

Moving to Florida doesn’t have to be expensive

Wherever you call home right now, transporting everything to Florida might seem like a giant headache. But it doesn’t have to be as complicated or expensive as you think! Unpakt can help you compare professional moving companies to find the best price and the services you need. So maybe now it’s time to start shopping for those sunglasses?