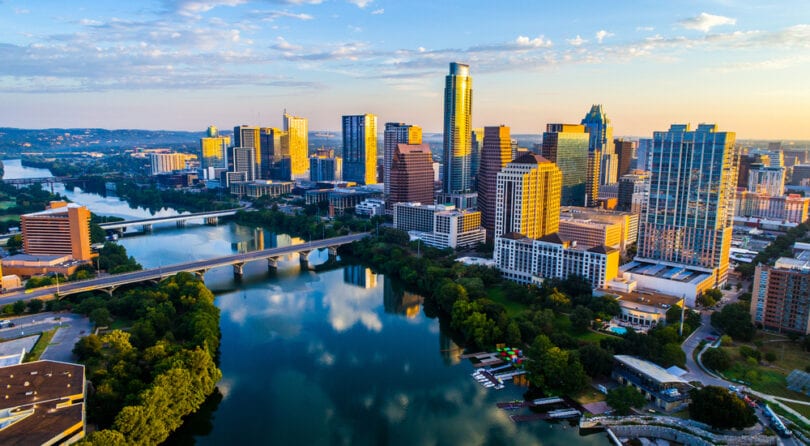 It seems that California’s heyday may be coming to a close. As the cost of living continues to climb and real estate gets harder to come by, many Californians are heading south. Way, way south in fact — to Texas! The Lone Star State boasts a more affordable cost of living, and still offers a milder climate and extremely varied landscapes. Cities like Austin, Houston, and Galveston offer an abundance of culture and job opportunities, while more rural areas offer wide open skies for those who want more space. Whatever it is that draws you to move from California to Texas, here’s all you should know for a successful transition!

Moving to the Texas Climate

Much like California, Texas is a big state and the climate varies widely depending on where you land. In general, the winters tend to be on the milder side with very little snow except in the mountains. Summers get hot and humid, with highs reaching 100℉ every once in a while. The Gulf Coast, where Galveston sits, experiences hurricane season between June and November, with peaks in August and September. So if you live in coastal Texas, be prepared for some heavy storms unlike those you might’ve seen in California.

Cost of Living in Texas

After the cost of living in California, just about anything else is going to seem like a walk in the park! On average, home prices in Texas are a whopping 60% lower than in California. That number does exclude Austin, however, where real estate is at a premium because of the city’s skyrocketing popularity. Across almost every category, Texans pay less than Californians. Healthcare, groceries, utilities, you name it. The only category where Texans pay more is transportation.

Another huge draw for the move from California to Texas? Taxes. California has one of the highest income taxes in the country, whereas Texas is the land of no taxes. You won’t need to pay corporate or personal taxes in the Lone Star State.

Moving to Texas for job opportunities

With Austin, San Antonio, and Dallas-Fort Worth ranked among the top ten growing economies by Forbes magazine, there’s no doubt that opportunity abounds in Texas. Austin is a happening place for artists and creatives. It has also become more of a tech hub as both Google and Apple bring offices to the city recently. Galveston is a coastal oil city with plenty of jobs, and Dallas-Fort Worth has been dubbed “Silicon Prairie” because of its abundance of tech companies. Many companies once solely headquartered in California now have Texas bases, so if you’re looking for work the odds are in your favor!

California is certainly renowned for having some pretty amazing chefs and top-notch entertainment. Texas does pretty well in holding its own, both in the food and entertainment categories. You’ll find some excellent tacos and authentic Tex-Mex cuisine available in every city, and the world-class barbeque is certainly brag-worthy.

Entertainment in Texas varies from place to place. Austin is known as a mega-hub for independent music, hosting the yearly Austin City Limits festival that celebrates the indie scene. Texas is also, of course, a hotbed for country music with abundant cowboy culture. The Museum District in Houston is always a popular attraction, and of course, Texans love their sports teams. The Dallas Cowboys, Houston Astros, and San Antonio Spurs are just a few of the national level teams you can root for in Texas.

Logistics of Moving from California to Texas

If you are moving to Texas, there are a few important things to consider when planning the details. First, if you are moving near the Gulf Coast, avoid peak hurricane season in August-September. Most of Texas is incredibly hot at this time of year anyway, making moving generally unpleasant.

The major cities like Austin and Dallas are known for having terrible rush hour traffic. This is in large part because most people in Texas own a car. So when scheduling your arrival to your new home, try to avoid prime rush hour traffic!

When you’re ready to schedule your movers, let Unpakt help! We have a database of hundreds of vetted movers who are ready to help you move from California to Texas. Get a moving quote quickly and easily online!