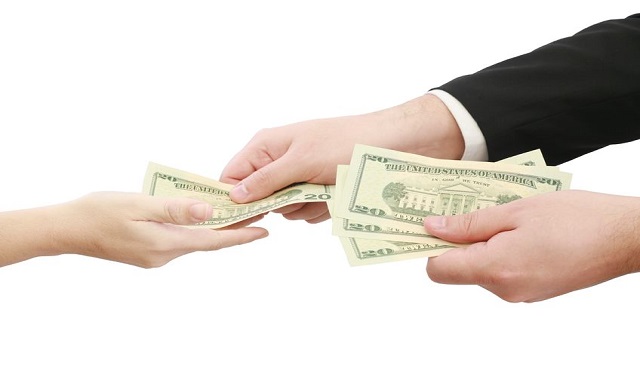 Tipping has always been a controversial topic, and even more so when it comes to professional movers. Of course, their company is paying them for the work, but most people feel that giving them an extra reward for doing a good job is proper – but that begs the question how much do you tip movers these days? Can you just order them pizza and beer?

If you do decide that you should tip your crew (because though it’s optional, truthfully it is customary to tip movers), here are some insights on the standard practice, and a few differences between what you should tip local movers and those who work for interstate moving companies.

How much should I tip local movers

Even when moving locally, movers are tasked with handling your personal belongings, and they do most of the backbreaking physical labor so that you don’t have to. If you are happy with your movers and you want to tip them for their service (which let’s set this straight: it isn’t required, but is common practice!), there is no set rule. The acceptable average tip amount for local moves is 10% even though some say that for the amount of hours movers put in, 15% or 20% is a standard. In any case, make sure to equally divide the tip between the movers.

But this is just a guideline and should be adjusted based on the quality of the service provided. Tipping movers can also include sharing some cold lemonade, homemade cookies, or other treats to make their day a bit better. They’re working hard to make your life easier, after all! But if they are moving a significant amount of boxes and furniture, only providing refreshments might be seen as being stingy. Something to consider.

How much should I tip long distance movers

When a crew of workers is involved in moving your belongings over a number of days, the moving bill can really add up. In these instances, are you really expected to tip 15% on such a big invoice? Many national moving companies will repeat the standard reply when asked that tipping is not expected and is very much up to the individual customer.

But again, let’s be honest: these movers are definitely exerting a lot of effort on your behalf, maybe even spending days on the road or driving through the night. Many people say they like to take into consideration how carefully their belongings were moved into their new home and if their stuff arrived on time before deciding on any tip amount. It is certainly a good idea to check your belongings for any breakage or damage before you pay your movers and send them away, but it’s good to budget ahead for your tip. There’s another thing to take into consideration when tipping LD movers. The gap between pick up and drop off can stretch up to 30 days (where your belongings spend time in storage), and the team might change as well. Who and when do you tip? The answer is… both, and it’s up to you decide how much.

Major moving companies say that the standard tip for a multiple-day move is typically in the range of $50-200 per person on the crew, regardless how much the moving invoice tallies (remember that a big size LD move can cost you even $10,000, and the movers should be tipped in proportion). That gives you a bit more flexibility to show your appreciation for a job well done, and for a personable moving team. Who knows? While they’re packing all your treasures you might just get to know one another.

One thing to check and consider: make sure that your moving company is not adding a service charge to the bill, which is considered to be a “gratuity included” kind of situation. You want to reward your movers for their backbreaking labor but you don’t want to double tip. Check the fine print and, if you are still wondering, it never hurts to ask the moving company whether a service fee will be included in the final bill. Of course, using a service like Unpakt will give you a guaranteed rate and save you the headache of wondering…

So how much should you tip your movers?

Hopefully, this gives you a good idea of how much to tip movers as you create your budget; for a local move, 15% is good, and for long distance moving a flat amount of $50-$200 is appropriate to tip for superb service (in case of separate teams for pick up and drop off than 50% upon pick up and 50% upon drop off). But in the end, you want to tip your foreman and packers an appropriate amount for the service they provided — after all, they just saved your back, and your knees, and maybe your elbows, and your fingers…