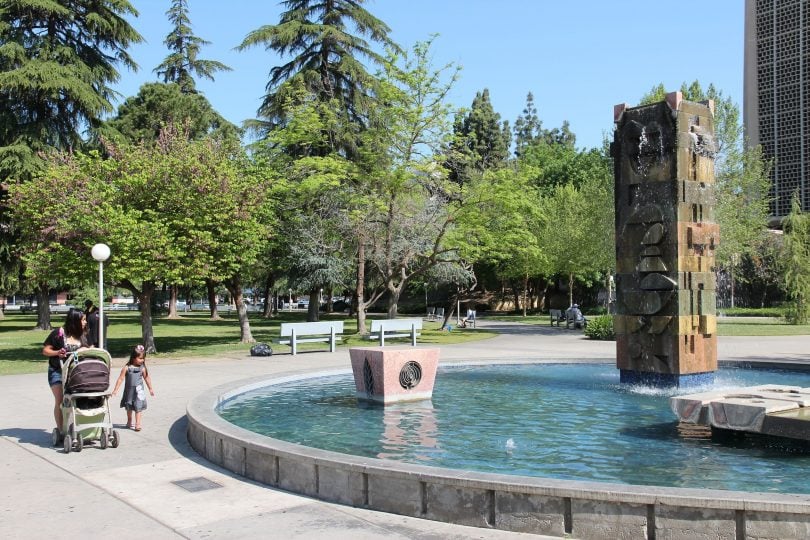 Fresno, California, is the state’s fifth largest city and is located right in the center of the fertile and sunny San Joaquin Valley. Moving to Fresno lands you nicely in the middle of quite a few of California’s natural attractions like Yosemite National Park, Sequoia National Park, and Kings Canyon National Park. So you’re ready to relocate? Here’s the inside scoop on the best neighborhoods in Fresno to help you narrow the search for your new home.

This neighborhood basically encompasses the Downtown area of the city. Here you’ll primarily find high-rises and close-quarters city living at a pretty low-cost rate — apartments here go for around just $700 per month!  House values are fairly low as well, so you can likely find something in an affordable range if you’re deciding whether to buy or rent a home. Downtown has easy access to amenities like grocery stores and entertainment. You can walk just about everywhere you need to go in Central Fresno, including the historic Fulton Mall, the Fresno Convention and Entertainment Center, and several sports venues if that’s more up your alley. That also means most people in Central don’t bother having cars — with the beautiful California weather year-round, it’s easy to get around without them. On the downside, schools in Central Fresno rank lower overall, and the crime rate is 60% higher than in the rest of the city; perhaps this is why the population of this neighborhood is primarily young adults rather than families. If you fall into that category and want to live right in the middle of the action, Central might be a great place to relocate.

On the other end of the spectrum is Woodward Park, situated on the outskirts of the city with plenty of open space, access to parks, a much lower population density, and quiet, tree-lined streets. You’ll find a much more rural feel than in the rest of the city, the schools are ranked some of the best in Fresno with the highest graduation rates, and property values are significantly higher. Rent in Woodward Park is significantly higher on average, around $1,200 per month. Crime rates are the lowest in the city, making it an incredibly walkable part of Fresno — though you’ll likely want to have a car due to its more remote location. Still, there are a fair number of amenities to keep you happy close to home, like the vegetarian Ethiopian restaurant Lucy’s Lair, or enjoy an all-day happy hour on Sundays and Mondays at Papi’s Mex Grill. With Woodward Park so close by, families may find they’re happy sticking to the outskirts of Fresno and making the ten-minute trek to Downtown sparingly.

This neighborhood is also tucked a bit further toward the outskirts of the city and is a very popular part of Fresno for families looking to get the benefits of a big city without living right in the middle of the buzz. Rent prices are a bit higher than city average at around $800 per month, and condo or townhouse prices are almost twice as expensive as city average. You get what you pay for, though — schools in Hoover are high-performing and rated above the city average. Amenities are readily available and walkable, including the Fashion Fair Mall and the diversity of shops and restaurants located along E. Shaw Avenue. Check out the pub fare and brews at the Right Wave Inn, known by locals as The Wave, or grab a cuppa something hot at Little Leaf Tea. The one downside to Hoover? Crime rates are a bit higher than the Fresno average.

For frequent travelers and those looking to keep a finger on Fresno’s economic pulse, McLane is in the center of the action. It encompasses the Fresno Yosemite airport, making travel easy. It’s only a brief commute away from downtown and the Tower District, so commuters will appreciate quick access to all things work-related. Rent in McLane is pretty much on par with the Fresno median, around $900 per month, though home values are slightly lower than the rest of the city. That might have something to do with the higher crime rates, which are above city average, and the lower rated school systems — except Manchester Gate Elementary, which received the highest rating from GreatSchools.org.

If you’re looking for something tasty, head to Churrasco Grill for the best Mediterranean food in town, or play some old school games over a few beers at the Spokeasy Public House. For shopping, your best bet is to take advantage of the neighborhood’s proximity to Downtown — the best of the shopping all in one place!

Once you decide where to live, it’s time to make a budget. Here’s a breakdown of long-distance moving costs to get you started! When moving locally, enlist the help of the best movers in Fresno for a stress-free transition!